I ordered this with great excitement an epic supernatural novel, a collaboration between the two King men, this would be great, I’m a huge Kingy fan so how could I be wrong? I normally devour his work but this was one book I picked up and had no trouble putting down, in fact by the time I was a hundred pages in I wanted one of those cocoons for myself and kept wondering why some of the women even wanted to stay awake.

It’s an okay book kind of a rehash of Under the Dome/Cell/The Stand but not as epic, with a men Vs. women twist. I didn’t love the characters, there were far too many and I began to not care who was who quite early on. If you’ve never read Stephen King please don’t start with this one.  It won’t stop me from reading everything he writes but it was a bit of a plodding book and I was quite pleased to finish it. 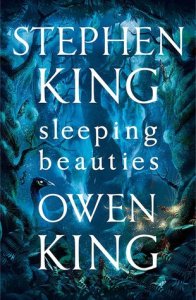 In a future so real and near it might be now, something happens when women go to sleep; they become shrouded in a cocoon-like gauze. If they are awakened, if the gauze wrapping their bodies is disturbed or violated, the women become feral and spectacularly violent; and while they sleep they go to another place. The men of our world are abandoned, left to their increasingly primal devices. One woman, however, the mysterious Evie, is immune to the blessing or curse of the sleeping disease. Is Evie a medical anomaly to be studied, or is she a demon who must be slain? Set in a small Appalachian town whose primary employer is a women’s prison, Sleeping Beauties is wildly provocative and gloriously absorbing.