This is part of a 3 word challenge that I like to do, it warms me up so I can get on with my writing. Occasionally I do one that I like, those are the ones I will share with you.

Would you like to have a go? Use these 3 words and link it to my page, have fun.

Emily watched out of the window as the wind blew around the grand tree. The branches swayed in time with the gusts but the branches looked like they were trying to escape the trunk as they were pushed left and right in the wind. She was spellbound by the sheer force of nature, she held her mug of steaming hot chocolate enjoying the warmth from the cup. It was good to be indoors on a day like this, she could watch the mayhem from a safe distance. Then the rain started hard and fast, throwing itself against the window, stinging the glass almost as if nature was angry at her lack of fear for it.

That was when she saw it, there was something in the tree, something black, it fell a short distance and then managed to grab on and regain its balance. Emily peered closer, it looked like a cat. The poor thing, she thought. The rain would stop soon and the cat would be able to get home. She looked into her mug, she had nearly finished her drink and soon she would have to return to work. Looking up she saw the cat had settled on a branch, knowing it was okay Emily went to prepare for going outside in this awful weather.

She headed for the shower and then got dressed, as she was coming back down the stairs she heard a sound that froze her blood. A scream. She ran down the last of the stairs and scanned the room, nothing. The scream came again. She went through to the kitchen and looked around, then it happened again. She opened the back door, the wind pushed its way in, almost taking it from her hand. There, on the ground was the black cat screaming. She scooped him up in her arms and grabbed a towel to dry him off. He had stopped screaming now and was snuggling into her but still obviously in distress. She knew today work would have to come second as she ran to the car and headed for the vets.

That very same evening she sat watching TV with the cat who she had named Lucky curled up on her lap. No one was looking for him yet but they would eventually, until then she would look after him. 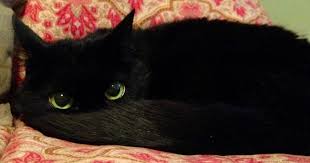